Presidential portraitist, educator, and wife of painter Willem de Kooning, Elaine de Kooning was at the heart of the so-called New York school, or abstract expressionism, in the late 1940s and 1950s. An essential aspect of the New York school was its effort to assimilate into visual terms, often using abstraction, relatively new knowledge and understanding about human nature gained from psychology and anthropology. Years later De Kooning served as the first Lamar Dodd Visiting Professor of Art at the University of Georgia (UGA) in Athens. 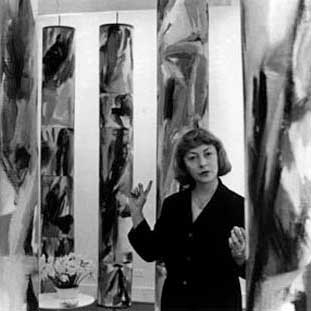 Born Elaine Marie Catherine Fried in Brooklyn, New York, on March 12, 1918, she studied at the Leonardo da Vinci Art School and the American Artists School in New York City. She met Willem de Kooning in 1938, and they were married at City Hall, New York, in December 1943. Although married for more than forty-five years, De Kooning and her husband spent most of their marriage separated; nonetheless, she championed and promoted his work throughout the 1940s. De Kooning began working as an editorial associate for the magazine Art News in 1948 and wrote articles about some of the major figures in the art world, including the painters Josef Albers, Arshile Gorky, Hans Hofman, Franz Kline, and Mark Rothko. Working at the center of New York City's cultural life, she became friends with the composer John Cage and the dance choreographer Merce Cunningham. She was an active member of the Eighth Street Club, a site where artists met, drank, and socialized. The club's regulars included the painters Helen Frankenthaler, Adolph Gottlieb, Grace Hartigan, Lee Krasner, Milton Resnick, Larry Rivers, Kline, and Rothko.

Although De Kooning used the abstract expressionist form, with its energetic strokes of intense color, she also executed numerous portraits. Her most famous series of portraits, painted on commission from the White House, is of U.S. president John F. Kennedy. She traveled to West Palm Beach, Florida, to make painted sketches of Kennedy and spent much of 1963 working on a presidential portrait of him for the Truman Library. Following Kennedy's assassination in November 1963, she stopped painting for a year and devoted her time to teaching and sculpture.

The first of her immense canvases in the Bacchus series, based on a nineteenth-century sculpture she saw in the Jardins du Luxembourg in Paris, France, were painted in her studio on the UGA campus during her tenure as Dodd Visiting Professor, from 1976 to 1978. In 1977 De Kooning spent the summer in Cortona, Italy, with the UGA Study Abroad program. Over the course of her career, she taught at the University of New Mexico, Albuquerque; the University of California, Davis; Carnegie Mellon University in Pittsburgh, Pennsylvania; Yale University Graduate School in New Haven, Connecticut; and the Parsons School of Design in New York City, among others. Her paintings are in the collections of major museums, including the Solomon R. Guggenheim Museum and the Metropolitan Museum of Art in New York, the Georgia Museum of Art in Athens, and the National Portrait Gallery in Washington, D.C. Elaine de Kooning died of lung cancer in 1989.