The term Action Painting was used for the first time in 1952 by art critic Harold Rosenberg to describe the works of painters Jackson Pollock, Franz Kline and Willem de Kooning. Artists would drip, throw, spatter, and pour paint on to the surface using various tools such as meat basters, pieces of wood, or sticks, along with the 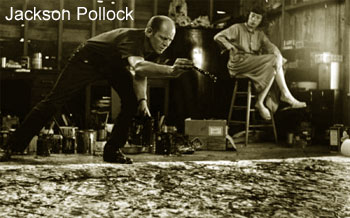 more traditional brushes and palette knives. The canvas was seen as an arena, and the process was an epic struggle beween man and material. Painting became an irrational, instinctive and impulsive fragment of existence representing the energy and psyche of the artist. The Action Painting work thus became the form and trace of the living body, conveying intense action and motion. Jackson Pollock would sometimes dress up in different outfits and invite spectators to witness the event.